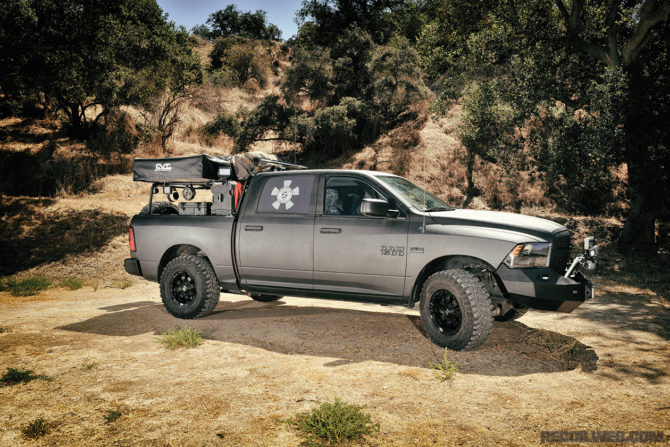 If we could indulge our vehicular interests in the same manner we do our firearms, then it wouldn’t take long to amass a fleet that’d rival our childhood Hot Wheels collection. With our daily drivers, though, we can usually only afford to buy one that can accomplish a variety of tasks. With each survival-oriented vehicle we cover in this publication, the point is to give you, dear reader, some inspiration to start thinking about what would best suit your individual needs and budget if you could only pick one. Some people, however, aren’t limited to just one.

You’ll probably recall the name Survivor Truck if you’re a regular reader of RECOIL. We previously covered owner Jim DeLozier’s first two iterations of said vehicle in Issues 8 and 22. The first one being an ’80 Chevy C70 that’d damn near rival an MRAP; the second being a Cummins-diesel-powered Ford Excursion. Each has its own unique story and purpose. Jim’s created yet another that now encompasses all three major U.S. automakers. Why? What could he possibly do with all these trucks? We asked Jim the same questions, to which he answered, “Whatever I want.”

Let’s back up a little and revisit Jim’s initial intentions. While living in California, Jim couldn’t help but cogitate on what sort of vehicle would enable him to go a long distance with a lot of gear if SHTF. There was no way to do that with what he had at the time. So if he had to get 500 miles away from the Golden State with family and supplies, Survivor Truck 1 became the solution to that problem. Now that he no longer resides in the land of background checks to buy ammo, the next obstacle was how to make the first version smaller and still get a safe distance with enough people and gear to make escape practical. Survivor Truck 2 took care of just that. Now, the question became, what could he drive on a daily basis instead of just having a vehicle for an emergency and also be a bit more mainstream for his clients? Answer — a kitted-out ’14 Ram.

Yes, it’s a Dodge, but Fiat Chrysler Automobiles changed the truck line name to Ram as of 2010. “I was looking at new trucks and wanted something I could drive everyday that was light, small, and efficient,” DeLozier says. “The Ram was the best value. A Ford or Chevy with the same payload would’ve cost me $10K more, and $15K more for a Toyota. The Ram came with a bumper-to-bumper lifetime warranty for an extra $2,400, an eight-speed electronic HD transmission, and a 5.7L Hemi. Before it’s loaded down I can get 22 mpg highway, and around 17 to 18 around town.”

Being as hard on trucks as he is, Jim felt the performance combined with the warranty was nothing to sneeze at. Next came the ancillaries. Jim added a Rancho Shocks leveling kit in front with stiffer shocks in the rear, as well as Hellwig self-leveling airbags and antisway bar, and a VIAIR tank and compressors. Then came the need to outfit the bed to hold more gear. Jim reached out to Steve Ellis at Urban Garage and gave him a rough sketch of what he was looking for. Ellis welded up a bed rack to support the Cascadia Vehicle Tents Mt. Rainier 3+ person tent. Jim then designed mounts for lights, cameras, RotopaX fuel cans, fire extinguisher, and GoLights.

The fuel can mounts wrap vertically around the cans, making them very secure and completely supporting the weight, providing a platform for a 360-degree pan/tilt GoLight searchlights on each side that are controlled by two joysticks. Jim also added a beveled scene light on each side and created recessed areas for bed lighting, both provided by Whelen. The rear lighting, flood lighting, and RDS lightbar in the front were provided by Rigid Industries and the emergency lighting and adjustable-beam lightbar are from Fenix and are controlled by two Switch Pros eight-switch control modules.

The bumpers come from Iron Cross Automotive with LED bumper lights and a Warn Winch, shackles, and Spydura synthetic cable. The truck’s exterior was shod in LineX for durability. For electronics, three Odyssey Extreme AGM batteries are charged and controlled through a Blue Sea ML Remote Battery Switch automatic charge relay and 200-amp circuit breaker for each feed, with fuses and relays on each appliance for total protection of the system.

The C4ISR (Command, Control, Communications, Computers, Intelligence, Surveillance, and Reconnaissance) system consists of a Panasonic VG-Z1 Toughpad mounted in a Havis docking station and four full-time cameras (IR, thermal, PTZ) in BASH (Ballistic Anti-Shock Housings) from Dotworkz. Cameras and monitor by VDO are powered through a solid-state computer, MoFi 4G/LTE router MobileMark antenna. All of this is integrated with his other vehicles via a Silvus Technologies tactical mesh network configured by Brent Kinnaman at K-Tac Communications in San Diego. There is also a Cobra Electronics CB radio and 2,400-watt power inverter, two-way radio hard mount, and portable HAM radio.

We think it’s safe to say Jim isn’t building mall crawlers and has something that’ll enable him to face sh*t head on if things get hairy. If you’re in the market to create your own survival vehicle, feel free to reach out to Jim via his websites for consultation. At this point he’s on track to be the Q Branch of tactical trucks, so there’s a good chance he can point you in the right direction if you’re not sure where to start and want to turn your daily into a bug-out vehicle. It’s probably only a matter of time before we’re reporting on yet another addition to his armada of vehicles. Anyone want to take bets on an Aston Martin with revolving plates? We’re not ruling it out.